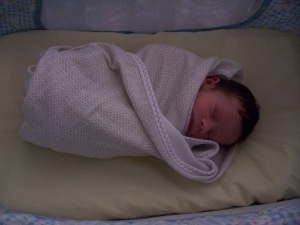 This is my son a few days after he was born. He did not weigh 60 pounds like I was expecting, actually he still doesn’t.

This summer my kids will be seven and five. Even though it has been years, there are still days when I feel thankful that I am not pregnant, and then I chug a pot of coffee, shoot some tequila, put on my tightest pants, and hop on a roller coaster—just because I can. I know pregnancy is supposed to be a beautiful time, and I should have been grateful, but I felt more like I was serving a sentence. I love my children, I even like them; I just prefer them outside my body. My second pregnancy was easier to endure than the first because I had a toddler, and pregnancy made us sort of the same. We both liked to take long naps in the middle of the day, we were both constantly sober, we wore a similar style of elastic pant, and sometimes we even both peed on ourselves.

Now as my kids get older and parenting becomes increasingly challenging—babies are a breeze—I think back to my pregnant self, taking naps under the desk at my office, spending Saturdays on the couch watching Rock of Love marathons, and I think, what the hell was my problem? Maybe the actual pregnancy had nothing to do with my frustration. Maybe with the first pregnancy I was dealing with the loss of my independence, the acceptance of a great responsibility, and the disintegration of life as I knew it. Once my son was born, it all felt right and even worth it, but the nine months of stewing almost did me in.

The following is a reflection of a first-time, glowing (sweating, really, especially under the boobs) pregnant lady:

In my mind, growing another human life requires a lot of calories, and a large portion of those calories should be in cake-form and eaten in bed while watching reality television. My basic pregnancy diet theory was based on the idea that by not drinking alcohol, I would automatically be consuming fewer calories, so I could eat anything I want. This proved untrue pretty early in the pregnancy, as I could no longer fit into my regular clothes minutes after I peed on a stick. Once I realized I was not going to be one of those girls who looked like she just swallowed a basketball and that I would be more like one of those girls who looked like she swallowed an entire basketball team, I told my elastic waist pants to hold on tight because they were in for a wild ride.

I gained the full 25 pounds of recommended weight in the first six weeks. Other than the extreme gigantism, the pregnancy was going well. I was only sick for the first few months, and I felt pretty agile, like for instance if I dropped my piece of late night cake, I could easily roll off the bed and retrieve it. I read all the pregnancy books and subscribed to the weekly pregnancy email updates. (Your baby is now the size of a hamster! You are now the size of Australia!) I was inappropriately nonchalant about the labor process, and even once compared it to training for a sport, like a volleyball match, which might have been a valid comparison if during the match I accidentally swallowed the ball and then had to volley it over the net from my vagina.

I was so ready to be done with the pregnancy, to meet this baby that everyone had been talking about, that I was willing to go through any means necessary to get the job done. If the doctors told me that in order to get the baby out they were going to send a team of ninjas to my house to attack me, probably right in the middle of my favorite meal, I would have said, “Sign me up!”

Finally after eating my way through three seasons, my due date arrived. There it was circled on the calendar, the day that had been etched in my mind since my first doctor’s appointment 67 pounds ago. Seven days later, I checked into the hospital for an induction. I put on a backless gown—finally some room to breathe—and then settled in for some heavy breathing and gripping the sides of my rocking chair. I paid attention in labor class. I saw the videos. I knew what to do. I let the nurse know that I would not be getting the epidural, and she was polite enough not to laugh, but did suggest that if I changed my mind I should let her know as soon as possible. I had a killer mix CD, so I was sure I would be fine. A few hours later, as I rocked faster and faster with my husband staring at me from a nearby chair with blood coming from his eyes, I suggested he get the nurse and see what she could do. I was not against any measure, like euthanasia for instance.

Eventually, I got an epidural. Then about two hours later, one of the most exciting moments of my life happened: I gave birth to my son. He was perfect. He looked like a miniature version of my husband, which was a little weird, but adorable. I, however, did not look like a miniature version of anything. In some of the photos from the hospital I look like a really fat Sally Jesse Raphael, aided by the fact that while I was pregnant my vision got really blurry, and I had to get glasses to see my food.