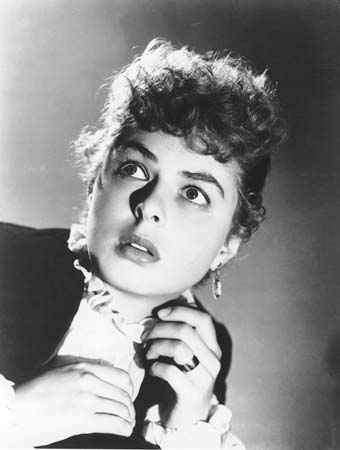 The 1944 film Gaslight tells the story of a young woman named Paula (played beautifully by Ingrid Bergman) who is deceived by her new husband Gregory (Charles Boyer) into believing she is crazy. His manipulation starts small. He tells her that she has these little flaws and then makes them true through sleight of hand. He says, “You know you are inclined to lose things, Paula.”

“I didn’t realize that,” she responds because she has not been known to lose things and then he gives her a broach and when she loses it she thinks, oh shit maybe I do lose things! Of course, she didn’t lose it. He hid it from her because he is an evil murderer, but Paula does not realize this and the cycle continually repeats itself until she questions everything she understands about her own mind.

Gregory wants control and keeping someone in a state of heightened nerves is a great way to leverage power. He also wants money. He murdered Paula’s aunt and then tricked Paula into moving back into the house where the murder happened—a home conveniently owned solely by Paula until they married—so that he can spend his nights rummaging around in the attic looking for the family jewels because he doesn’t have any. He eventually finds them sewn into a gown, and I found this scene amusing and willed him through the screen, Gregory, please put on the dress. Sadly, he doesn’t put on the dress but he does grab the jewels and rub them around in his greedy little hands.

Meanwhile, Paula is held captive in her own house, like the madwoman in the attic or the young wife with her yellow wallpaper or modern day moms stuck cleaning with a cartoon bald man. Gregory tells her she is not well enough to go out and then fabricates events that make her believe he is right. What is most interesting about Paula is that she is not weak. Perhaps that is why he must go to such deceptive measures. He cannot control her transparently.

In the end with the help of a tall, handsome inspector from Scotland Yard, Paula realizes that she is being tricked. Each night Gregory leaves the house and walks to the back alley into an abandoned flat and climbs through a skylight into the attic. I like that the story involves him scurrying like a rat. There is no dignity in greed. When he gets to the attic he turns on the lights, thus using some of the home’s gas and causing the lights in the main house to dim. Paula notes that shortly after he leaves the lights dim and shortly before he returns, they brighten. She knows this change is real and that factor serves as a lighthouse to her sanity.

She knows. Because she is not actually crazy. He distorted her reality. He controlled information. He made statements and then through manipulation made them come true. It is how most card tricks are done (spoiler alert!) He also places her in a spiral of fear and as her insecurity about the reliability of her own mind increases she must rely on Gregory to act as her compass. This gives him even more opportunity to manipulate her environment.

I was interested in this film to get a better understanding of the term gaslighting to condemn what Trump is doing by continually denouncing the legitimacy of the media. He is attempting to distort reality by telling the American people that we cannot trust the information we are receiving. And perhaps it started small, the same way Gregory started by simply telling Paula that she was forgetful, and now it has grown into daily poorly written reports and tweets that suggest the information we receive is fake. It is a tactic used to try to unsettle the public trust and make us question what we should believe.

Distorting someone’s perception of reality can be done by inserting a single, subtle word that invokes doubt, like “You look nice today,” which usually leaves me questioning what kind of trash heap I have looked like every other day. Or maybe something like, “Make America Great Again.” Trump’s entire slogan was a manipulation. He used two unstated assumptions. We don’t even have to get into this country’s history of oppression and discuss timelines of exactly which horrifying “again” he was aiming for, the point was that by accepting the slogan, followers had to swallow the ideas that America is not currently great and that there was a time in our history when things were better. Relying on assumptions is a bad magic trick.

Trump said the media can’t be trusted throughout his campaign because as any gaslighter knows, the seed must be planted early and often. In May of 2016 Trump told Sean Hannity that Jeff Bezos, Amazon founder and current owner of The Washington Post was unfairly attacking him and using the prominent news source “as a toy” (interesting choice of words, is it all just a game?) Trump suggested that Bezos, who as owner must obviously have complete control of all reportage, did not want Trump in the White House because of his “huge anti-trust problem.”

Since his first day in office the constant lambasting of any news source that does not report the facts he wants to hear is an attempt to make the American people question what we know is real. All negative news is fake news! Coincidentally, that is what I tell anyone who has ever spoken to my ex-husband. Trump is like a controlling spouse, and unlike most controlling spouses who must go it alone Trump has a posse, like his Press Bitch, Sean Spicer, and his rotisserie chicken, Kellyanne Conway, who stand up to corroborate all his attempts at misdirection.

Trump uses Twitter as a means of supporting his own fabrications. Lies! It is as if he thinks that if he tweets it, then it must be true. Sadly, I am not sure Trump is as good at gaslighting as Gregory. He does not have the restraint. His constant tweeting of easily verifiable misrepresentations keeps the majority of the public’s sanity in check. And maybe it is his overuse of exclamation points, but I always picture his tweeting persona as a giant orange New Year’s baby with his thumbs pounding on the keys in tantrum.

Usually what a gaslighter wants is control. Trump wants fame, fortune, and to be right. His grand wizard Steve Bannon wants control and to be alt-right. Under Bannon’s leadership Brietbart News has become an active participant in glaslighting America through its outrageous commentary meant to fracture and leave Americans in a state of heightened fear. Breitbart uses media as instigation. By spinning stories in certain ways, the site enrages the public, for example a search of “black on black crime” on the Breitbart site retrieves five pages of articles with 20 stories on each page. That is 100 articles. The sensationalizing of these stories seeks to demonstrate that black citizens are inherently violent and therefore any disenfranchisement is due to their own behavior and not a product of systemic racial inequality. These stories serve as a tool of the oppressor and promote othering. Breitbart is bad fucking news and now we have let its leader scurry into the White House.

Breitbart has even politicized the Super Bowl, suggesting that the Patriots comeback win over the Atlanta Falcons was like election night all over again. There is an actual story that compares Brady and his football sorcery to Trump’s “win” on election night. They are both backed by evil slobs, so I can see that angle. Even the links to ads on Breitbart of other things “You Might Like” are charged, like the picture of Obama with a cigarette hanging out of his mouth and the caption “Obama’s IQ will shock you!” which I felt compelled to click on but never found Obama’s IQ or Donald Trump’s, although I did learn that Hillary Clinton has the same estimated IQ as Kesha and both, of course, have higher IQs than Arnold Schwarzenegger.

It is important to remember that before gaslighting became a verb it was not the dimming and brightening of the lights that incited the manipulation. In the original story, the lights are what help Paula keep reality in check. They are the clue that bring her back to her own sanity. Those of us who can clearly see what these puppeteers are trying to do to the American people, that they are attempting to keep people in a state of fear and to promote their own corrupt agendas through distortion and sleight of hand, must stand firmly as the lighthouse that can help this country and all her people come back to sanity.